In the martial arts, zanshin is a Japanese term that refers to a relaxed state of continuing awareness. While the specific applied interpretation varies somewhat from art to art, it is generally accepted that to be in a state of zanshin is for one to be completely aware of and in tune with their surroundings. 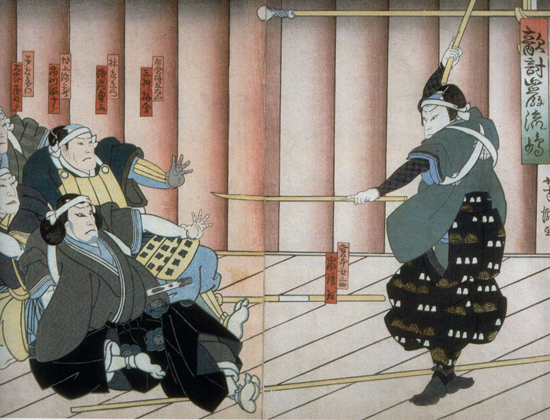 From a tactical perspective, zanshin could be interpreted as a state of situational awareness, but it goes beyond that. It also implies a state of calm despite the circumstances at hand, such that the ability to filter out extraneous information and focus on critical inputs and tasks remains unhindered.

So what does this have to do with your business?

The Three Stages of Learning

Zanshin is not just a useful state of mind for martial artists; far from it. In traditional Japanese culture, zanshin is commonly recognized as a prerequisite to the artful expression of any skill worth doing well. From tea ceremony to calligraphy, from noh to go, zanshin is recognized as the state whereby the person who has mastered a skill expresses that skill at the highest level, one of focused detachment and relaxed, almost effortless near-perfection of technique.

Shu relates to the stage of learning fundamentals, ha is the stage where the practitioner possesses enough skill, knowledge, and experience to break from traditional patterns and innovate without disharmony from the central or core teachings of the art, and ri is the state at which mastery is expressed effortlessly, as an expression of the practitioner’s self.

Similar in theory and application to Malcom Gladwell’s 10,000 hour rule, shuhari is (at least in the Japanese cultural paradigm) the path to mastery of any art or skill. I would hazard a guess that practitioners of any martial art from any cultural tradition would agree that a person must follow these stages on their way to mastering their martial art.

And, while performance hacks abound, the concept of shuhari is there to both guide and instruct beginners as well as journeyman practitioners of any art that there are no shortcuts to the artful expression of technique as an effortless, consistent result of skill mastery.

So if we can agree that zanshin is the product of mastery, and mastery the product of going through the stages of shuhari, and that shuhari is the path to mastery of any skill…

Then what makes us think that martial art business mastery can be attained without a firm grasp of the fundamentals, consistent application and practice of those fundamentals, and eventual mastery of the same?

There are three things that will kill a martial arts school should the school owner succumb to them; distraction, indecision, and complacency. Just as distraction or indecision in a sparring match or altercation can result in meditating in a horizontal position, so can distraction from your most important business activities knock out your business. And just as complacency in practicing and honing your fighting skills can lead to defeat in the ring or “street”, complacency in your business can quickly result in failure or bankruptcy.

How is it then that we, as martial artists, can approach our art with this life or death attitude, and yet we approach our businesses with a lackadaisical attitude that would shame us were we to approach our martial arts practice in the same manner? Is there really that much of a difference between our art and our business?

Of course not, because our business sustains our art. I believe that failure to recognize that as a fundamental truth about running a martial art school remains the root cause of the widespread indifference toward martial arts business knowledge and skills. If we realized at once that our art depended on our business, and not the other way around, then we’d have little to no difficulty with raising a degree of enthusiasm toward learning how to be better martial arts business owners.

Applying Shuhari to Learning the Martial Art of Business

So how can we apply shuhari to the business of starting and running a martial art school? For starters, we must identify and learn the basics. That means finding a martial arts business system that is aligned with our personal and professional goals, and then learning that system from bottom to top (*cough* Small Dojo Big Profits *cough*).

Not incidentally, this is also where we learn to have confidence in what we’ve learned, by abandoning doubt and skepticism and putting that which we’ve learned to the test. Skeptics quickly become believers when they experience the benefits of learning and applying martial arts business fundamentals.

This “shu” stage on the road to martial arts business mastery (learning and applying the fundamentals) is roughly a two-year process. It is only after you’ve proven you have a grasp of the fundamentals (which I would mark by growing a school to over 100 students, then stabilizing it) that you can expect to have any measure of success with innovating your own ideas for your business.

Trying to build a better mouse trap before you’ve even learned to catch a mouse is as foolish as it gets. Yet, I see martial arts school owners making this mistake all the time, trying to innovate before they’ve even grasped the business basics. And, it always leads to failure.

Back to Zanshin and Martial Arts Business Mastery

So what’s our one purpose in running a martial art school? From a business perspective, it’s to generate revenue. And how do we generate revenue? Through marketing and sales.

Not through attending martial arts seminars, not through developing a winning competition team, not through adding new programs, not through training all day (or goofing off, that’s for sure), and not through pursuing rank or political influence in an organization or style. And while you may find those activities to be more interesting, enjoyable, or worthwhile, none of that pays the bills.

Nope. The only activities that are directly responsible for generating revenue in a martial art school are sales and marketing. So, if you’re serious about starting on the path to martial arts business mastery, I’d suggest you start by learning the fundamentals of martial art school marketing, phone skills, and membership sales.

Just remember, any personal or martial arts goals you set aside today so you can focus on growing your business can always be taken up again once your school is stable and throwing off profit. Moreover, all the things you currently have to think about and expend effort to get done in your business will eventually become second nature. And at that time it’ll only take you a fraction of the time energy it once took to get them done.

And when that time comes, you’ll be very grateful that you took the time to learn and implement the martial arts business basics. Then, you’ll have discovered that the key to applying zanshin to running your martial arts school is in repeating a few highly profitable skills and actions daily, until you don’t have to think about doing them at all.