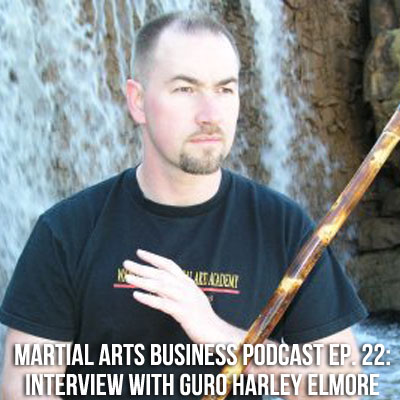 “How Harley Elmore And His Wife Built An Enrollment Of 450 Students… Teaching Jeet Kune Do and Filipino Martial Arts!” 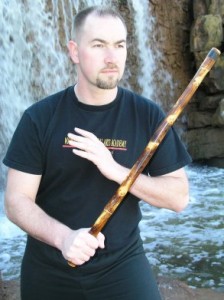 Harley has been in the martial arts for nearly twenty years and holds Instructor certification under Bruce Lee’s protégé Dan Inosanto to teach the Filipino Martial Arts as well as Lee Jun Fan Gung Fu.

Surprisingly, Mr. Elmore teaches JKD and Kali to both kids and adults at his school… and even more shockingly, he has over 450 students in his programs (400 of them are children)!

In this interview, he shares several key components of his success, and explains how he grew such a large school while teaching martial arts that most people would consider to be anathema to growing a large school.

Also, in the Tip of the Week, Mike shares some tips on starting a summer karate camp in your dojo.

Resources and Links Mentioned in this Episode:

Now, for today’s episode I have a guest on the podcast, Guro Harley Elmore. Harley runs a martial art school called Warrior’s Way Academy in Wichita Falls, TX, and he has a very interesting story. I think you’re going to get a lot out of what Mr. Elmore has to share and say in today’s interview.

I followed him on Facebook for a while, because he teaches some martial arts that I have an interest in, and had observed some of his videos of his students. Then he was brought to my attention again recently by someone who suggested that I interview him for the podcast, based on how successful he is at teaching the martial arts he practices.

I’ll just let you in on the secret – Mr. Elmore teaches jeet kune do and Filipino martial arts in his studio, and the interesting thing is, he mostly teaches kids, as you’ll find out in the interview. He is highly successful at what he does, and he came up the hard way, which I respect and appreciate quite a bit.

And I believe that for those of you who doubt you can teach certain martial arts, certain combative martial arts, to a broader audience… somehow, Mr. Elmore has made it work.”